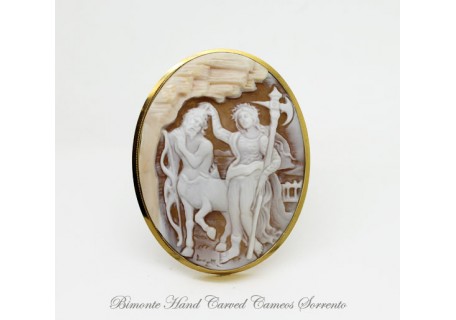 "Minerva and the Centaur" Cameo brooch and pendant ( copied from A.Botticelli) is designed and created by Bimonte Sorrento.

Our creations are frunished with certificate of authenticity

The painting shows in the foreground an impressive and harmonious female figure, with an abstracted and slightly melancholic expression, normally identified as Pallas. Her long, thick blonde tresses are adorned with a wreath of entwined olive branches with a diamond at the top within a four-leafed setting. The young woman is wearing a light gown, white and transparent, decorated with diamond-tipped ring motifs entwined in threes or fours, linked or separate. She is wrapped in a large green cloak. A mesh ofolive shoots encircles her shoulders, arms, breast and thighs, forming a sort of vegetable breastplate which makes her gown cling to the body. The points where the branches cross are fixed with diamond-tipped rings, while on her nipples are two mounted diamonds. On her feet she is wearing leather boots, open at the front like antique sandals. Finally, the woman is bearing defensive weapons, a halberd ("a battleaxe or mallet" in Acidini 1991) splendidly chased and set with a diamond, and a shield upon her back. With her left hand she is gently holding by his hair a centaur with long hair and beard, who yields to her grip with a sad reluctance, but submissively. The centaur is holding in his hand an Eastern-stylebow with a red and black handle and has the quiver holding the arrows slung over his shoulder. Hence, both figures are in possession of weapons � those of the centaur simple and rudimentary and those of the woman exceptional objects of applied art; those of the former are offensive and those of the latter defensive, but neither of the two is using them nor reveals any intention of doing so.
Hanging over the two figures is a spur of rock emerging from the cliff-face on the left. In the background, beyond a fence with broken posts is a stretch of water � possibly a lake or a gulf � closed by a semicircular coastline. The composition, in particular the face of Pallas and the rocks, are shown from alowered viewpoint, looking upwards.
There are no iconographic precedents for the scene. The female figure is entirely original in both her pose and in her garments and attributes. Doubt can be cast on the traditional identification with Pallas in view of the absence of certain attributes proper to the goddess, such as the helmet, the aegis and the sword. The figure of the archer centaur is a motif that was particularly popular in Florentine art in the mid fifteenth century, along with other semi-savage figures such as the satyrs derived from myth. Since ancient times � with the exception of the sage Chiron � centaurs represented untamed instincts and irrational passions. In consideration of this, and of the clear contraposition between the two figures, the couple has been generally interpreted as an allegory of the dominion of the virtue dictated by reasonover instinct, passions and vice. The reading of the composition is however still the subject of debate (see Fortunes and Criticism: Interpretations).